BLOUNT LAB
Dr. Zachary D. Blount
Evolutionary Biologist
Research Assistant Professor
​Michigan State University
Department of Microbiology and Molecular Genetics
BEACON Center for the Study of Evolution in Action
Contact
Greetings!  I am an evolutionary biologist who uses evolution experiments with bacteria to examine a variety of fundamental questions. My foremost interest is in the role of history in evolution. Unlike most natural phenomena, evolution involves a complex interaction between chance and necessity that makes it subject to what is called "contingency". Essentially, this means that evolving lineages of organisms will experience unique histories, and those histories can affect how they evolve. Contingency affects evolutionary repeatability, so we need to understand its effects if we are to fully understand or predict evolution. I am interested in how contingency affects, among other things, speciation, the origin, evolution, and consequences of novel traits, evolutionary potential, and the origins of biodiversity. Most of my work is focused on a population of E. coli that evolved to grow aerobically on citrate during the ﻿Long-term Evolution Experiment, which has studied the evolution of twelve, initially identical populations of E. coli in the lab for more than 74,000 generations since it began on February 24, 1988. This system provides me with a highly flexible model with which I can investigate contingency, in part by manipulating its evolutionary history.
I was a guest on the Knowledge Archives podcast:
November 27, 2020 Episode: Evolutionary Contingency: Does History Repeat Itself? 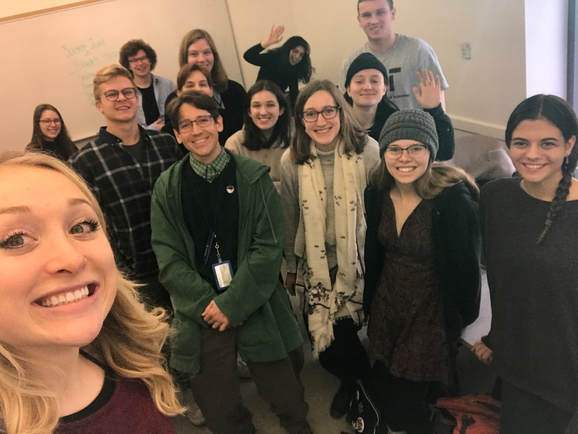 The members of Biol 191: Not Just Darwin, Fall 2018
Back: Shara Morgan, Adam Brown, Maleah Miller, Emma Wolfe Raible, Miles Crawford
Middle: Eli Rocke, Dylan Manning, Jane Zisman, Ana Inciardi
Front: Kate Zibas, Me, Schuyler Stupica, Sutton Amthor, Jess Karan
During my first semester as a visiting professor at Kenyon college, I got my first opportunity to develop my own course. I called it "Not Just Darwin". The idea was to cover the history of the idea of evolution as it morphed and changed through history, bloomed into a full theory with Darwin, went through a turbulent adolescence during the Eclipse of Darwinism, to emerge into vigorous adulthood with the Modern Synthesis and subsequent developments. The course also dipped into topics like the misuse of evolutionary theory for odious ideas like Social Darwinism, eugenics, and scientific racism and sexism, as well as the essentials of human evolution before wrapping up with a unit on the flavors and developments of creationism. It ended up being a spectacularly fun course that let me indulge my interests in not only science, but also philosophy and history. I learned a great deal, and generally had the best teaching experience of my life - indeed one of my best life experiences thus far. Much of this owes to the wonderful, brilliant, enthusiastic, and talented students I was fortunate enough to have in the class, not a one of whom was a biology major. They allowed me to experiment and grow as the class went on, indulged me in my tangents, and forgave me my mistakes. I am a better teacher because of them. I can only hope that they learned as much from me as I did from them. Take note of their names, for they will make the future.