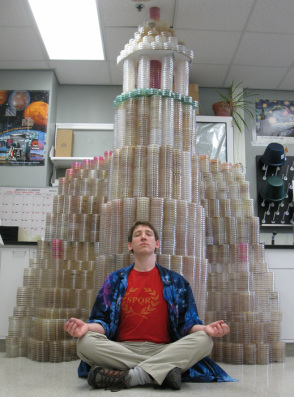 I am an evolutionary biologist who studies fundamental questions about evolution using experiments with fast-growing microorganisms. My research interests have been shaped by my interest in history’s role in evolution.

Evolution is a quintessentially historical phenomenon. Not only does evolution play out in lineages with unbroken chains of ancestry stretching back billions of years, but history is inherent to the complex tangle of chance and necessity at the core of evolution. Natural selection deterministically drives adaptation by inexorably sifting through variation that ultimately arises via stochastic mutation, while even beneficial variants may be lost at random to genetic drift. However, mutation can only generate variants of an existing genome that is itself a historical product. History affects what mutations may occur, and the range of evolvable phenotypic variation that may arise, thereby determining aspects of evolutionary potential, including prospects for the origin of novel traits and speciation. The consequences of this historicity, or path dependence, of evolution are not yet fully understood.

Stephen Jay Gould argued that evolution is fundamentally contingent, or historically sensitive. Famously, he suggested that evolution would follow different paths were it to be “replayed” again from the distant past. This “replaying life’s tape” thought experiment has provoked considerable debate, and prompted attempts to empirically evaluate history’s role in evolution using a number of approaches.

Experimental microbial evolution (EME), in which evolution is studied in populations of microbes propagated for long periods of time, is among the best ways to investigate evolutionary historicity. EME is highly flexible, examines evolution as it occurs, and does so in systems in which history can be reconstructed and manipulated. Moreover, EME permits realization of Gould’s thought experiment.

The primary system I use in my work is the Ara-3 population of of Richard Lenski's Long-Term Evolution Experiment with Escherichia coli (LTEE) at Michigan State University. The foremost microbial evolution experiment, the LTEE was begun on February 24, 1988, when Dr. Lenski founded 12, initially identical populations from a clone of E. coli B. These populations have since been evolved by daily, serial, 100-fold dilution into fresh medium. Under this regime, each population grows by about 6.67 generations per day, and over the course of the experiment's almost 30 years, each population has evolved for more than 73,000 generations. Viable samples of each population have been frozen every 500 generations, forming a fossil record from which clones or populations may be revived to study evolutionary changes in detail.

The LTEE is carried out in a minimal glucose medium that also contains citrate, which is included in the medium as a chelating agent that helps the bacteria take up iron (DM25). The citrate also constitutes a second potential carbon source, but E. coli is partly defined as a species by the inability to grow aerobically on citrate (Cit–). Moreover, spontaneous aerobic, citrate-using (Cit+) mutants of E. coli are very rare. They do arise, but they can generally only be isolated with long periods of intense selection for growth on citrate under unusual conditions. (There are Cit+ E. coli that are occasionally found in nature, but in every case so far, they are able to grow on citrate because they carry a plasmid that gives them the capacity.) Only one such mutant was reported in the lab in the entire 20th century! Nonetheless, in early 2002, after 31,000 generations an aerobic citrate-using variant (Cit+) evolved in the Ara-3 population. It has not since evolved  in any of the other 11 populations in the subsequent 15 years. This has been the most profound development in the LTEE to date, and it has presented opportunities to study a lot of nifty questions.

My research has focused on the origin, evolution, and consequences of the novel Cit+ trait. I used an experiment in which I actually replayed the tape of the population’s evolution from points in its history to show that the evolution of Cit+ in the LTEE was historically contingent. I showed that later genotypes were significantly more likely to re-evolve Cit+ due to an increased rate of mutation specific to that trait. I concluded that the Cit+ trait’s evolution had been contingent upon earlier potentiating mutations that had accumulated during the population’s unique history, and made the necessary variation accessible (Blount et al., PNAS 2008). This was the first direct, empirical demonstration of historical contingency in the origin of a novel and potentially cladogenic trait, as well as a vivid example of how chance differences in history can profoundly affect evolution, even in the simple situation of initially identical populations evolving under the same conditions. I have expanded on these findings in a series of reviews (Blount, Studies in the History and Philosophy of Science C 2016; Blount, Chance in Evolution 2016; Blount et al., Science, in preparation).

Cit+ evolution involved three phases likely typical of most novel traits: potentiation, in which prior mutations made the trait accessible, actualization, in which a final mutation produced a weak trait, and refinement, an ongoing process in which mutations accumulated that improved the trait. I collaborated with Dr. Jeffrey Barrick and Dr. Carla Davidson in using genome sequencing to explore these phases. We identified a chromosomal duplication that occurred in one of three co-existing clades as the actualizing mutation. This duplication coopted an aerobic promoter to activate a previously silent citrate transporter gene, citT, producing a weak Cit+ trait that was partly refined by further amplification of the duplicated segment (Blount et al, Nature 2012). I later worked with a team led by Erik Quandt at The University of Texas at Austin to identify two potentiating mutations that were originally adaptations to the population’s particular evolved ecology (Quandt et al., eLife 2015).

I have recently been investigating incipient speciation of the Cit+ lineage. Under Cohan’s Ecotype Species Concept (ESC), bacterial speciation occurs when a “niche discovery mutation” allows a lineage to invade a novel ecological niche in which it can diverge from its parent lineage. I have shown that the Cit+ lineage’s fitness increased dramatically through 40,000 generations. Adaptation during this time was to growth on both citrate via CitT, and the self-constructed resource of C4-dicarboxylates it excretes into the medium during citrate growth via the pmf-driven DctA transporter (Bajic et al, PNAS 2018). The Cit+ lineage concurrently lost fitness on the glucose resource E. coli normally prefers, consistent with ecological divergence and speciation (Blount and Lenski, in preparation). The same mutations underlie both trends, and may be incipient barriers to successful horizontal gene transfer between the Cit+ and Cit– lineages.

In partnership with Dr. Rohan Maddamsetti of Old Dominion University and Dr. Nkrumah Grant of the University of Idaho, I recently examined how Cit+ variants adapt to a citrate-only resource environment that is wholly novel to E. coli. This research provides insights into how genomes manifest latent evolutionary potential during adaptation to new niches. Curiously, we also found that citrate-evolved clones have significantly elevated rates of cell death (Blount, Maddamsetti, Grant et al. 2020).

The Cit+ trait, Cit+ lineage, and broader Ara−3 population together constitute a powerful and highly flexible model system. Much of my current and future research involves using this model system to study an array of fundamental aspects of evolution within an overarching investigation of evolutionary historicity. My basic strategy has two stages. The first stage involves studying a phenomenon of interest in the main Ara−3 population. In the second stage, I refound the population while tweaking modifications of genetic, ecological, or environmental aspects based on findings from the earlier studies, and then replay evolution. In essence, in this strategy I use Ara−3 as a control history, that being what, of all that could happen, did happen, and then study "what if" scenarios of what could have happened but did not using the experimental replays. In other words, while historians use counterfactual thought experiments to think over how history might have been different or what details were causally important, I can instantiate actual counterfactuals. This strategy allows me to examine evolutionary phenomena and evolutionary historicity at the same time.